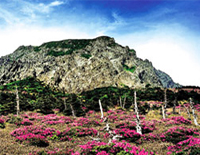 Hallasan stands out at the center of South Korea’s southernmost island, boasting exquisite landscapes due to its varied volcanic topography and vegetation distribution ranging vertically through the subtropical, temperate, frigid and alpine zones. The special nature of this area led to its being designated and managed as a national park in 1970, a UNESCO Biosphere Reserve in 2002, a World Natural Heritage Site in 2007. Muljangori Oreum registered as a Ramsar Wetland in 2008. 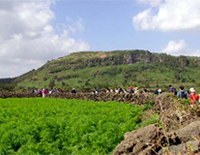 “Olle” [Ole] is the Jeju word for a narrow pathway that is connected from the street to the front gate of a house. Hence, “Olle” is a path that comes out from a secret room to an open space and a gateway to the world. If the road is connected, it is linked to the whole island and the rest of the world as well. It has the same sound as “Would you come?” in Korean, so Jeju’s “Olle” sounds the same as ‘Would you come to Jeju?’.
Jeju Olle’s founder Suh, Myungsook used to be the chief editor of a weekly news magazine. She worked hard as a journalist, but after struggling to reach her dream job for twenty years and then being at the top of her profession for another fifteen years, she needed a rest. She was exhausted and her mind felt empty, so she set herself a new goal. She hoped that she could walk the road to Santiago (Camino de Santiago – 800km pilgrimage from France to Spain). Eventually she made her pilgrimage in September, 2006. She met a British woman at the end of the trip and they promised to share their comforts and happiness on the road with others when they returned to their homelands…. 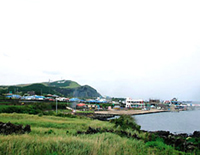 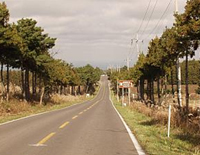 On Mysterious Road (or Bugaboo Road), a parked car on a slight hill road rolls uphill instead of going down hill. This is a result of an optical illusion in which the lower part looks higher because of its surrounding environment. 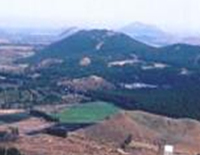 The eroded valley of lava that erupted from the middle of the crater is the largest on Jeju Island. On one side is a 4km oval valley.
On the southeast ranch site, there are many conical hills with lava detritus which are volcanic cones without craters. The Geomi Oreum in Songdang-ri, Gujwa-eup is also called the East Geomun Oreum to distinguish it from this West Geomun Oreum.
Local residents call it Geomul Chang (Geomeol Chang) or the Geomun Oreum since it looks black when covered with forest. However, according to a scholars etymological study, “Geomun” originates from “Gam or Geom” during the Ancient Joseon Era which means “God”. Therefore, “Geomun Oreum” means “Holy mountain”. The forest is thick with Pinus thunbergii and Japanese cedars. It is a multiple-shaped volcanic cone. On the top of the mountain, there is a large crater with a small peak with a horse hoof-shaped crater that widens to the northeast. 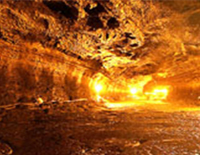 Manjang Cave, situated at Donggimnyeong-ri, Gujwa-eup, North Jeju, 30 kilometers east of Jeju City, was designated as Natural Monument No. 98 on March 28, 1970. The 7,416-meter long cave has been officially recognized as the longest lava tube in the world. The annual temperature inside the cave ranges from 11oC to 21oC, thus facilitating a favorable environment throughout the year. The cave is also academically significant as rare species live in the cave. Created by spewing lava, “the lava turtle”, “lava pillar”, and “Wing-shaped Wall” look like the work of the gods. It is considered to be a world class tourist attraction. 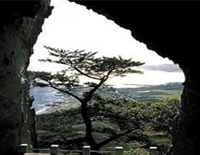 A Buddhist statue is enshrined in a cave on the southwestern slope of Mt. Sanbang. With a height of 5 m, a length of 10 m and a width of 5 m, it is not known when this statute was carved. It is said to have been Heil residence during the Goreyo Dynasty andthe calligrapher Chusa Jeong-hee Kim often visited here to contemplate life. Water drips from the ceiling and some Jeju people say the water droplets are tears of goddess Sanbangdeok who guards the mountain. Legend has it that this daughter of Mt. Sanbang was gorgeous.
She fell in love with a youth named Goseong but an official in town who had a crush on her confiscated his property and falsely put him into exiled him. Disappointed and despairing of the world rife with sins, Sanbangdeok returned to the Sanbang cave, turned herself into a rock, and continues to weep to this day. 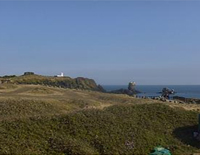 Jutting out at the eastern seashore of Jeju Island, Seopji-Koji is one of the most scenic views with the bright yellow canola and Seongsan Sunrise Peak as a backdrop.
The pristine beauty of Jeju can be seen in Seopji-koji. Sinyang Beach, a meadow filled with canola flowers, peacefully grazing Jeju ponies, a rocky sea cliff, and a towering legendary large rock (Sunbawe) all combine to make nature s masterpiece. Unlike the other coastal areas of Jeju, it has red volcanic rock (songi) and strangely-shaped rocks that at low tide transform this area into a breath-taking stone exhibition gallery.
Seopji-Koji has become a movie and drama location hotspot with Gingko Bed 2, The Uprising of Lee Jae Su, Thousand Day Night, and All In-A location shot was taken at Seopji-Koji to portray a picturesque scene of seaside home where the actress Jin Sil Choi lived in the movie Gingko Bed 2 (Danjeokbiyeonsu). It is also well-known as the shooting location for the TV drama All In, The Hyeopja beacon mound and lighthouse attracts a lot of tourists. 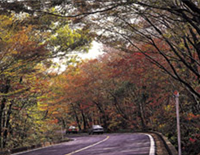 Highway 5.16 was the first national road in Jeju which directly linked Jeju City to Seogwipo City, reducing the travel time between the southern and northern parts of the island to less than one hour. Naturally forming a tunnel, a line of trees on each side along the highway stretches for about 1 km just south of Seongpanak. Snow in winter and the brilliant red and yellow leaves in autumn make this drive a mystical experience. 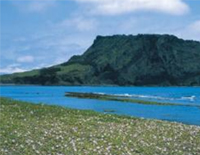 99 rocky peaks surround the crater like a fortress and the gentle southern slope connected to water is a lush grassland.
On the grassland at the entrance of Sunrise Peak, you can enjoy horseback riding. Breathtaking scenic views while taking a rest in the middle of climbing up the peak such as Mount Halla, the deep blues of the ocean, the multi-colored coast line, and the picturesque neighboring villages will become unforgettable memories. 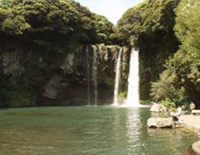 The waterfall falls from a precipice with thundering sounds, creating white water pillars. It has the name Cheonjiyon, meaning ‘the heaven and the earth meet and create a pond’. At 22 m in height and 12 min width, the waterfall tumbles down to the pond to produce awe-inspiring scenery. The valley near the waterfall is home to Elaeocarpus sylvestrisvar, ellipticus, which is Natural Monument No. 163, Psilotum nudum, Castanopsis cuspidatavar.sieboldii, Xylosma congestum, Camellia and other subtropical trees. This place is also famous as home to the eel of Anguilla mauritiana, whichis Natural Monument No. 27 and is active primarily at night.
The Chilsipri Festival is held in every September at the falls.